How to Make Your Own Baby Food: Fruit Recap 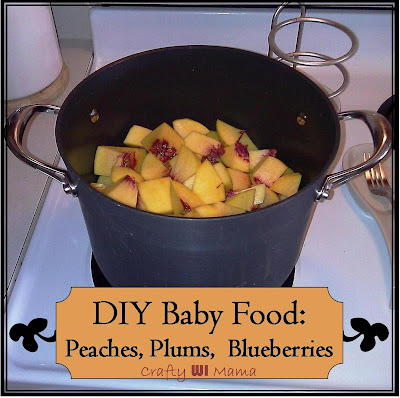 What a Sunday! A morning dedicated to peeling, cooking and blending, and now we have peaches, plums, and blueberries for Baby C to eat, all while saving half over the store bought food! This is a long post of the whole ordeal, so if you just want the end results, here:
Nearly 90oz of peaches at $0.08/oz
53 oz of plums at $ 0.07 /oz
and 27 mini cubes of blueberries from frozen we had on hand

Otherwise, keep reading on.. it is somewhat entertaining :)

Saturday after getting home from Gma & Gpa's house, I went to Sam's and loaded up on some produce. I bought:
Pears 5 lbs for $5.48 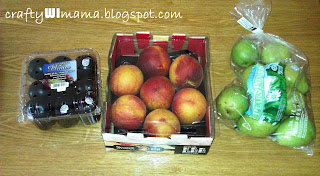 I had completely forgotten to grab my dad's apple corer/slicer/peeler when we were at their house on Sat, so apples will be for next weekend. Besides, I got way more food than I could process in one day and keep my sanity anyways :)

Sunday 5:30 am Baby C was awake. I knew it would be a rough day the moment I heard him screaming over the baby monitor. He's usually a very happy, joyful morning baby. Ugh, not when teething! Mr E got him dressed & bottle ready, but then I took over since  I knew falling back asleep was NOT going to happen. I'm such a creature of habit. 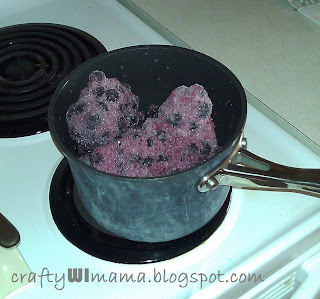 Blueberries were first. They were bought at Sam's, and have been in our freezer way too long. They have been snuck into everything possible in the past few months- pancakes, waffles, blueberry turnovers.


I don't even like blueberries, and I thought a little taste of them in pears or apples would be a nice treat for Baby C. I've read that they are a "super food", so why not get him loving the taste of them young? 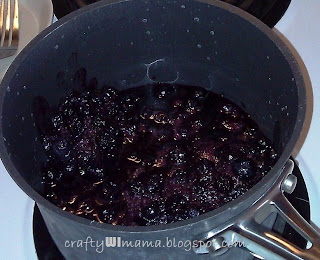 I simply dumped them out from the bag into a pot, covered, turned the burner on low, and let them simmer. There was so much freezer burn on them that I didn't even add water. They cooked for probably an hour or more. Most of that was defrosting. I made sure to stir every once in a while.  The temp was enough for them to bubble a little, but not burn the bottom.  After they were good and mushy, I turned the burner off and let them cool in the pot.


After the blueberries hit the pan, I started working on getting the peaches processed. Do you see these puppies? Dang! The biggest peaches I've ever seen!  There were 7 of them to make 4 pounds! The nice thing about ginormous peaches? More meat, and less peel and pit.

Peel, slice around the equator, pit, and chop. 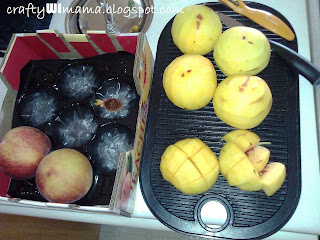 Some weren't quite ripe - they weren't soft and juicy like how you'd want to take a bit to eat. When peeling and chopping, that works out very well! The ripe ones get so slippery, which makes me scared that I'll chop a finger off.  I just take more time to be extra careful, and wash my hand of sticky juice more often too.

They got put in the big stock pot with a couple inches of water. Burner on low, covered, and let to simmer. 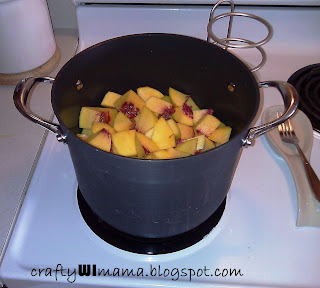 Next I got to the plums. I remember having a plum tree in my dad's little orchard when we were kids. I don't recall ever really liking plums, and I wish I did. I want our kids to love eating fresh healthy food, to build strong eating habits. I feel that  both kids should be exposed to lots of different foods, and maybe they'll learn to love them all. 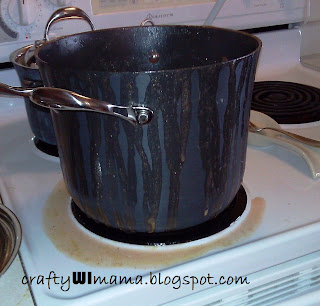 Plums were a whole lot more work than the other foods. There were 18 of them, and only 3.5 lbs. They are small, the peels are waxy, and the pits are sharp.  Why did I think this was a good idea? Well, they were paid for and there was no turning back once I realized just how much of an undertaking they would be. Somewhere in the middle of meticulous peeling of the deep purple skins, I looked over to find the peach pot boiled over. Burner too high!!!
Plums got chopped into 8ths, put into a smaller sauce pot with an inch or so of water, and set on low to steam and simmer.

Well, with the peaches then clearly well cooked to the point of trying to escape, I took them off the stove to cool.
After a quick break it was time to get the blender going! The peaches looked like jam, so soft and broken apart into strings. I was tempted to grab a spoon and pig out :) 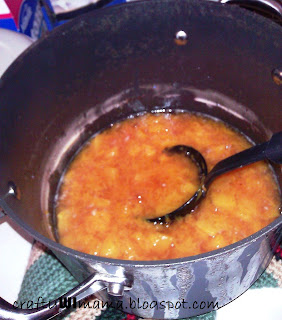 I ladled them into the blender, pulsed a few times to get the big parts broken up. Then used the liquify setting for a few seconds until it had a good smooth consistency.

I gave it a taste test to find that it was very tart. Much more sour than the commercial baby food. I wouldn't eat it by itself, and I'm sure Baby C wouldn't either.  It'll have to be added into pears or apples.  So they got poured into the freezer cube trays first, and then into plastic 2.5 ounce tubs.  All together there was 42 oz of cubes, and 19 tubs. 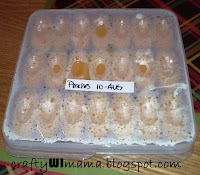 In a day or two, I will take the cubes out of the trays and put into pint Ziploc freezer bags. I don't like storing the cubes in the trays, since it's a pain to have to pop them out each and every time I want to use a cube. I'd rather get them all out at once, then when it comes supper time to use them, I'm not wrestling with the tray.

We have Post-It brand printable file folder label sheets that I picked up at Sam's with an e-value a while back. They stick well and come off easy too. The uses for them are endless - return addresses, baby food labels, freezer meal labels, binder tabs... it goes on. The labels go on the trays and each tub with what food it is, and the date.   I used to also include for daddy-proofing "use within 2 months, once thawed use within 2 days". But I'm so involved with feeding Baby C it's not worth the time to write out the whole thing on each tub.

I set the peaches aside in their containers to cool down to room temp. I try not to put warm things into the freezer, otherwise it sends it into over-drive and it all takes forever to get frozen.This is not only a waste of electricity, but it's also a food spoilage hazard.

Let the warm food cool down to room temp, then freeze.
If you can't wait (like if you're going to bed, and it would go bad sitting on the counter), put it in the fridge, then freeze later. 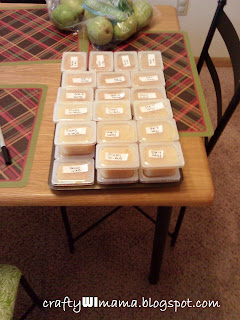 The plums got blended up next. They also tasted pretty bitter/tart, and I really wanted to make cubes out of them since I know I'm going to have to add them to other fruits, but I didn't think ahead enough and we don't have enough trays. They went into a mixture of 10 2.5 and 8 3.5 ounce plastic baby food tubs.

I had the thought of only filling up the tubs half full of plums so that I could add apples or pears later. That just takes up space though, and I don't need a bunch of air sitting in  my freezer for the heck of it. It ended up being a good choice, since I nearly didn't have enough tubs anyways!

All the little tubs of food got stacked onto a cookie sheet on the dining room table (see the little bit of those adorable chairs that I redid??? LOL).  They sat to cool, and the cookie sheet helped make it easier to eventually take all the tubs down into the deep freeze in our garage.  When they were cool, I had to neatly re-stack and organize them at the bottom of the big deep freeze chest. If I was really thinking, I would have put them all into tupperware/bakeware that would actually fit into the freezer - so I could just plop it in and be done. Well, we learn by doing! 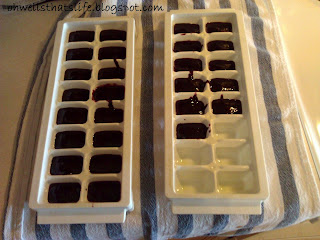 Blueberries were last to blend. I didn't have many tubs left, and I knew I wanted only small amounts to add into other foods, so I used some regular icecube trays we had in the cupboard. I'm a little nervous as to whether or not they'll come out as a cube in one piece, so I lightly sprayed the trays with a little Pam. I might regret that....

{update: they popped out great!!! I have to remember that Pam trick for next time!}

They got covered with plastic wrap, and set in the little freezer upstairs.

So what did it all end up being?

Peaches
4 lbs of peaches somehow turned into 89.5 oz (5.5lbs)? Yeah, I consider myself a good cook, but I believe the law of conservation of mass still applies in my kitchen.  I blame adding water, and the liquify setting adding air to the puree as the culprits. Plus, I don't completely fill up the cubes or tubs, since the food will expand as it freezes.  In the tubs too, you don't want to fill them up to the top so that you're able to stir as you're warming without it spilling all over.

Basically, the 4 pounds of peaches had minimal waste. I'm pretty happy with that.

Plums
3.5 lbs of plums turned into 53 oz of food (3.3lbs). Not bad!  That calculation is reasonable. There was considerably more waste with the plums than the peaches.Those 18 tubs of food will last us a good 2 months, since I'll be mixing them in with other things.

Blueberries
I should have weighed the blueberries before :(  my bad. We got 27 mini cubes to liven up other fruits. That'll last the 2 months as well!


Looking back on all of it, man it was a lot of work. I didn't finish with it all until 11AM, and all of the fruit is so tart it can't be eaten on its own! I'm kicking myself now for not grabbing the apple corer/slicer/peeler this weekend. It makes so much more sense to pre-mix the food instead of freezing it all seperately, then having to concoct blends once they're thaw. Well, hopefully it'll be as easy and dumping different fruits into one bowl, then stirring. I hope I don't regret how I did it all. 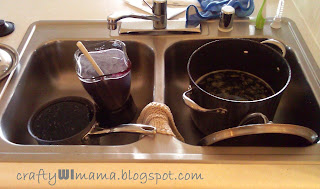 I'm such a good Mama, I even cleaned up my own mess.  And then I cut my finger on the blender blade when washing it out, these things never end without a battle scar.  But managed not to burn myself!

That's it for now!
Hoping to do sweet potatoes and pears during the week.

Thank you so much for visiting my blog. I love to read your comments, thoughts and questions on my posts.